Onemarket is committed to facilitating the accessibility and usability of its website, onemarket.com, for everyone. Onemarket aims to comply with all applicable standards, including the World Wide Web Consortium's Web Content Accessibility Guidelines 2.0 up to Level AA (WCAG 2.0 AA). Onemarket is proud of the efforts that we have completed and that are in-progress to ensure that our website is accessible to everyone.

If you experience any difficulty in accessing any part of this website, please feel free to call us at (415) 777-5577 or email us at info@onemarket.com and we will work with you to provide the information or service you seek through an alternate communication method that is accessible for you consistent with applicable law (for example, through telephone support). 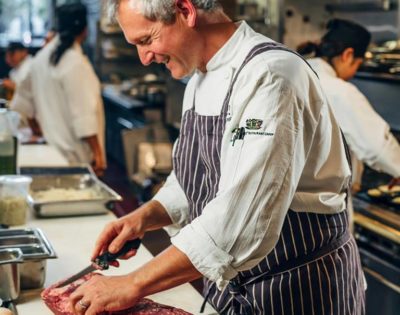 Mark Dommen is a unique talent who has spent more than 20 years in the kitchen. After years of classical training with some of the world’s most eminent culinary masters, Dommen’s move to head One Market® Restaurant in 2004 marked his exciting return to the San Francisco dining scene. His modern take on American cuisine earned the restaurant a Michelin star in 2008-2012 and a 3 ½ star review from San Francisco Chronicle critic Michael Bauer. Dommen was also named a 2007 StarChefs.com “Rising Star”. Outside the restaurant he actively participates in numerous charitable and community endeavors.

Dommen’s contemporary, seasonal American fare developed through his work in some of the world’s most distinguished restaurants. His career began at Fleur de Lys in San Francisco, where Chef Hubert Keller became Dommen’s mentor in the art of contemporary French cuisine. Dommen later spent four years in New York, honing his craft with one of his largest influences, Gray Kunz at Lespinasse and also with David Burke at Park Avenue Café. By the time he opened Palladin as Sous Chef for the legendary Chef Jean-Louis Palladin, his immersion in the art of French cuisine was well advanced. Dommen was next invited to join Julia’s Kitchen in Napa Valley as the opening Executive Chef. While he was at the helm, the restaurant was named one of Esquire magazine’s “Best New Restaurants.”

“I truly enjoy experimenting with the freshest of produce, seafood and meats to create entirely new and unexpected dishes,” says Dommen. “I make a point each day to ensure that the menu is a reflection of the finest raw materials prepared in a unique, delicious and artistic way.”

’Some of Dommen’s favorite dishes to make when not in the kitchen at One Market Restaurant include pizza and barbequed beer-can chicken cooked over apple wood chips. He lives in Napa with his wife and two daughters and enjoys skiing, golf and fishing in his spare time.

At One Market Restaurant in San Francisco, Lorenzo Bouchard works to ensure that the restaurant upholds its commitment to providing an unparalleled dining experience for its guests.

“With a history of serving quality cuisine in an ideal city location, One Market Restaurant has been a popular force on the dining scene since opening,” says Bouchard. “One of the most important aspects of my job is to make sure that we continue to surpass our guests’ expectations and raise the bar in terms of excellence in cuisine and service.”

Lorenzo got his first taste of the culinary world when he was waiting tables in college and became entranced by the bustling excitement and activity. He later worked as a waiter under Chef Dennis Foy at The Tarragon Tree in New Jersey and as a food runner then waiter and then manager under Chef Michael Roberts at Trumps (named after the wild cards in Bridge, not the former occupant of 1600 Pennsylvania Avenue) in Los Angeles. Lorenzo was the opening Manager of One Market in 1993 and served as General Manager/Partner from 2000 to 2008. After a two year Southern California sabbatical, he returned to One Market in March 2010.

“The most rewarding aspect of my position is receiving a sincere ‘Thank you’ from a guest for all of our collective efforts, and knowing that this guest will share their experience at One Market Restaurant with their friends and family.”

Bouchard’s civic involvement has included a stint as a Director of the Golden Gate Restaurant Association and his participation as a founding member of the Steuart Street Restaurant Row Association. He recently completed his second term as a member of the Board of Directors for San Francisco Travel.

In his spare time, Lorenzo loves spending time with his spouse, Fred and their special needs rescue black Labrador Retriever, Jett at their home in Rancho Mirage, CA. Lorenzo is working as well on catching up on the family history he’s recently discovered via 23andMe. He met his paternal biological family in 2017 including his father who owned and operated a successful NY-based multi-national fruit and produce import business and was a master home-chef and a grandmother who was the first female chef admitted into a Manhattan chef’s labor organization. Clearly the apple didn’t fall far from the tree. 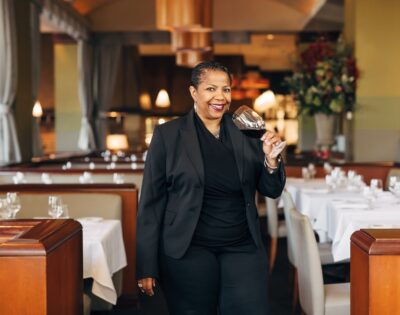 Tonya Pitts has been in the food and beverage industry for over 20 years. Her career started in St. Louis, Missouri as a host during college. Tonya was very fortunate to be surrounded by nurturing food and wine professionals who realized that she had a palate. Tonya’s Fine Art studies relocated her to the Bay Area and a new chapter was born. Tonya’s first job in San Francisco was with Chef Judy Rodgers at Zuni Cafe and Chef Jeremiah Tower at Stars Restaurant as a server. Needless to say, Tonya only paints for fun now. After three years, Tonya was running the wine program for Loretta Keller at Bizou Restaurant. It was with Loretta Keller that Tonya realized her true passion for wine.

Tonya has worked in many notable houses in the Bay Area and has been featured in Wine & Spirits Magazine, Tasting Panel and numerous news and industry publications. She is also a judge for the San Francisco International Wine Competition and is a tasting panelist for Wine and Spirits Magazine. Tonya is currently pursuing wine studies with the Court of Master Sommeliers and continues to educate herself and others on the world of wine. 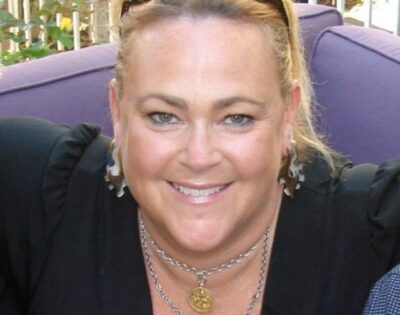 Over her 30 years in the hospitality industry, Christine has seen it all. Beginning as a hostess, she then worked her way up to a server and bartender before her path began to veer towards private dining at some of San Francisco’s most esteemed restaurants such as Zuni, Boulevard, and 25 Lusk. By the time Christine took on roles as a Banquet Captain and Manager, her experience and familiarity on the floor allowed her to achieve seamless execution time and time again. In addition to her insightful approach to management, Christine’s artistic background and communicative spirit allows her to encapsulate the vision of any client, conceptualizing personalized events. Having worked with prestigious individuals like the Obamas and top tier companies such as Salesforce, JP Morgan, Goldman Sachs, and Amazon, Christine’s attention to detail and receptiveness has set her apart from others in her field. With an underlying passion for hospitality and compassionate nature, Christine is excited to share her expertise with One Market Restaurant’s guests as the new Director of Private Events.

Created by Chef Bradley Ogden and restaurateur, and still Managing Partner, Michael Dellar in 1993, One Market Restaurant has become a standard for sophisticated dining in San Francisco. For the past 14 years One Market has offered the award winning farm-to-table cuisine of Chef/Partner Mark Dommen. The restaurant sports views of the Ferry Building, F-Line Trolley and Bay Bridge. Featured are an open exhibition kitchen with a special “Chef’s Table”, a wood-fired grill and rotisserie, several private dining rooms, a vibrant bar, and caring professional service directed by General Manager/Partner Lorenzo Bouchard. One Market also boasts one of the city’s most impressive wine lists curated by Sommelier and Wine Director Tonya Pitts and a stellar cocktail program from Bar Manager Oscar Davila.